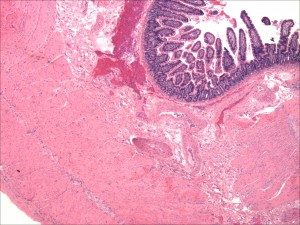 In digesting the foods we eat, it’s the small intestine that does the “heavy lifting.” This organ performs the major work of breaking the food (nutrients) down into smaller fragments or components in a process that is called digestion. These components are then absorbed by the small intestine. They include protein, carbohydrate, fats, minerals and vitamins. They are then released into the bloodstream which carries them to all the tissues and cells of the body. This process of digestion, absorption and release into the circulation involves the normal functioning of the stomach, small intestine, pancreas and liver.

Critical to this process are tiny filaments called villi, which line the small intestine. These microscopic finger-like projections greatly expand the intestine’s surface area, maximizing the effective absorption of nutrients into the bloodstream. When the immune system of an individual with celiac disease goes into overdrive, it attacks and destroys intestinal villi (atrophy). Nutrients cannot be fully absorbed. This results in the term malabsorption. In celiac disease, all the components of the diet (carbohydrate, fats, minerals and vitamins) may be malabsorbed, or only a single nutrient such as a mineral (calcium or iron) or a single vitamin such as folic acid. The ability to take full nourishment from food is compromised. 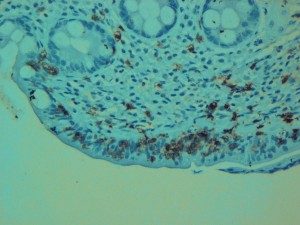 A by product of the immune response is the generation of antibodies to tissue transglutaminase and various food products including gliadin. These antibodies are thought to not cause any direct damage and only be by products of the inflammation.

There is today no evidence for a direct pathogenic role of anti-gliadin and anti-transglutaminase antibodies. However, it remains possible that the immune complexes formed by these antibodies and their targets transglutaminase and gluten, play a role in the amplification of the local inflammatory response. The second component of the anti-gliadin T cell response is the intraepithelial CD8 T cell response.

There are two separate immune processes going on in the intestine with individuals with celiac disease. The first is an immune response in the epithelium, which is the single layer of cells on the surface of the intestine that provides the main barrier for toxic substances preventing them from entering the intestine and it is also the site for absorption of nutrients. In celiac disease, the epithelium is infiltrated with lymphocytes and the epithelial cells are damaged. The arm of the immune system responsible for this damage is the innate immune system. 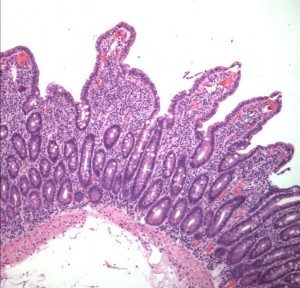